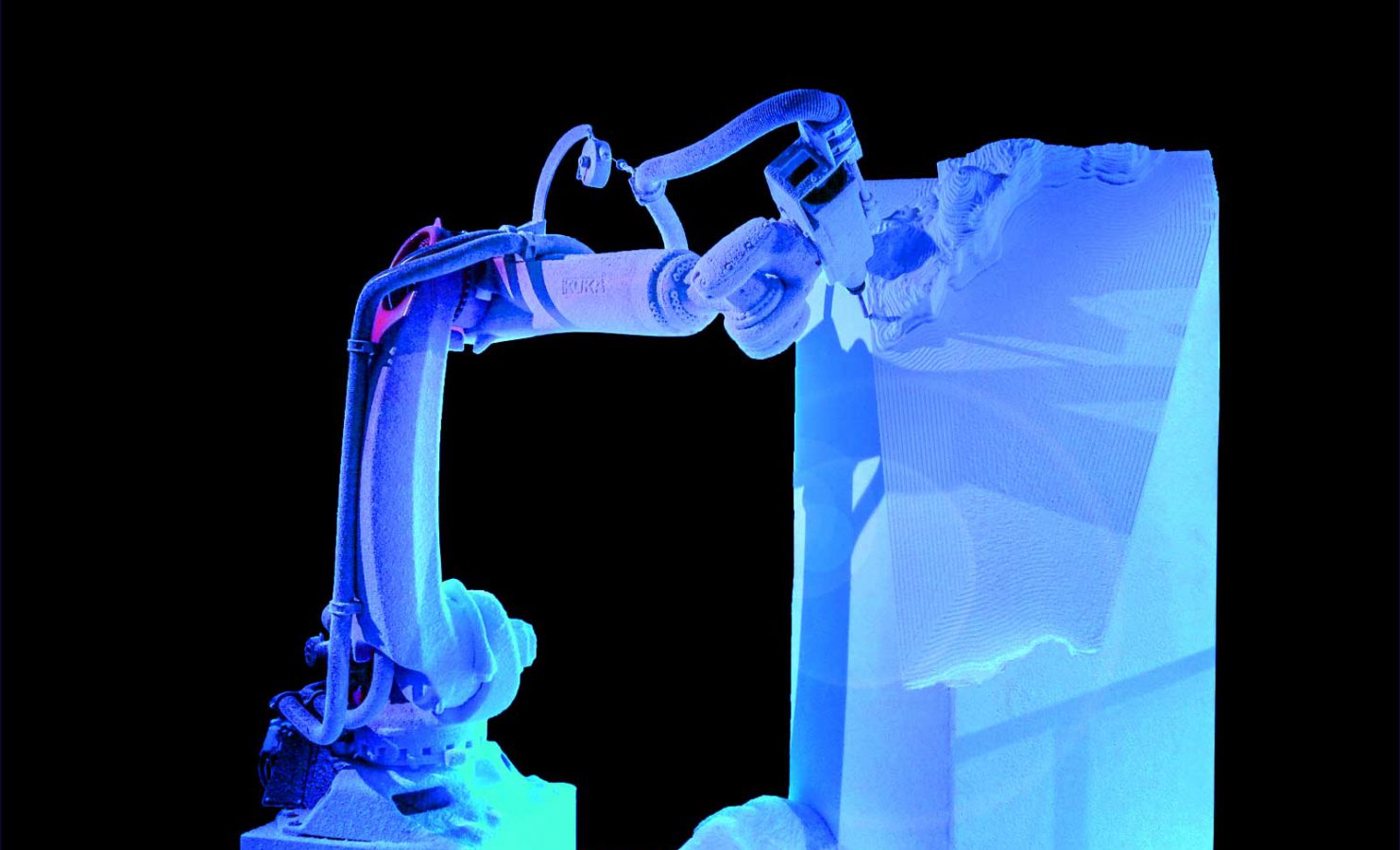 “Internet of Things” (IoT) is part of a current development in which “the fourth industrial revolution” is to take place through “Industrie 4.0”. This development is still in its infancy. What happens when algorithms and AI no longer merely communicate, coordinate and organise, but begin to autonomously control robotics and place production and logistics orders in the cloud? The result of this truly revolutionary approach could be called “Things of Internet” – in its abbreviation: ToI.

“Industrie 4.0” is a buzzword, word mark and marketing initiative initiated in 2011 by the German Federal Government (BMBF) as part of the “High-Tech Strategy”. “4.0” is intended to refer to a fourth industrial revolution. In the broadest sense, this is about the digitisation of industry on the basis of the “Internet of Things”. The network concept is the decisive factor.

This is described as follows on the BMBF’s website: “The future project Industrie 4.0 aims to put German industry in a position to be prepared for the future of production. It is characterized by a strong individualisation of products under the conditions of highly flexible (mass) production. Customers and business partners are directly involved in business and value-added processes. Production is combined with high-quality services. With more intelligent monitoring and decision-making processes, companies and entire value-added networks should be able to be controlled and optimised in almost real time”.

“Internet of Things” (IoT) is a general term for the linking and coupling of real and haptically experienceable objects (products) with a virtual network. Objects and networks communicate autonomously and under specific assumptions. According to the set parameters, information is exchanged and instructions for action are executed. The information provided by the object, e.g. by sensors, is transmitted to a network and processed there. Functions can therefore be executed on the object from the network. Such network-compatible objects (products) are also referred to as “smart”. There is a feedback loop between reality (objects) and virtuality (programs). This is also possible without the active participation of the user.

Decisions are already being made on the basis of assumptions calculated by algorithms. This involves the optimisation of analytical processes and integrative communication. Chatbots such as Apple’s “Siri”, Microsoft’s “Cortana” or Google Now are vivid examples of how far the development of such dialogue systems has already advanced. Basically, the structure is always the same: a “question” is asked via a user interface, this is analyzed, compared with a database and a corresponding “answer” is given. However, these inputs and outputs are no longer of a mere textual nature but can have a direct impact on the user’s environment.

With a “Hey Siri, remind me when I’m in the car.” it starts. With “Autonomous Driving” it already goes a decisive step further. By reading the corresponding definition on Daimler’s website, this becomes clear through the simple statement:

»Self-driving means the autonomous driving of a vehicle to a specific target in real traffic without the intervention of a human driver.«
(Source: Daimler)

The “VisionX” study from Bosch shows in which direction transport logistics is heading: “Self-driving Cargo” finds its own ways.

»60% of businesses have implemented or plan to implement artificial intelligence.«
Source: Oracle/Intel

The factory of the future with a smart production organises its own operations:

“The machines in the factory of the future will be largely organised on their own, supply chains will automatically assemble, and orders will directly transform into manufacturing information to flow into the production process. Nevertheless, in an Industrie 4.0 world, human beings remain indispensable – as creative leaders and thinkers who “think ahead” with their intelligence and “teach” machines in the form of software.”
(Source: Siemens)

Most of the changes in the market economy context were and are based on optimisation processes with regard to increasing production and profit. All internal and external processes and their corresponding context-related influencing variables are analysed, corresponding data collected, processes described, target variables filtered out, evaluated and optimised accordingly. Due to the complexity of the influencing variables and the difficulty of data collection, this is no easy task. Areas where humans play a role are more difficult to evaluate than areas where only machines are used. Key performance indicators become the measure of success or failure. If autonomous factories as well as big data and AIs organise and optimise themselves and react more quickly to unpredictable factors and are also successful in terms of business management requirements, this system will progress as a model for success.

Googles “RankBrain” focuses on artificial intelligence, which generates its own knowledge gain for the optimisation of search results. This happens in the background. The search mask as a user interface is the only point of contact between the machine and the user, who primarily wants a quick and successful solution. He is not interested in anything else at the moment of the request. Whether a real person is sitting at Google looking up a book or an AI calculating the answer does not matter to the user at this point. “The real news is not that Google uses machine learning in general or that the company, which otherwise likes to keep a low profile, is giving unusually open-hearted insights into the architecture of its algorithms at this point. What’s more explosive is that the hitherto unknown “RankBrain” has even been officially confirmed as the third most important factor for the ranking of search results and scores better than humans when processing new search queries.” (Source: searchmetrics)

On February 01, 2016, Mark Zuckerberg announced the one billionth WhatsApp user on his Facebook account: »One billion people now use WhatsApp. […] There are only a few services that connect more than a billion people. This milestone is an important step towards connecting the entire world.«

One billion users is not only an expression of an almost indescribable intensity of communication, but also means that one billion people make all their contact data, its links and content available to a company almost unconditionally and without reservations for straightforward communication. The positive effect of the optimised communication seems to cross-fade possible negative aspects such as data protection.

In the Adobe Report “The Future of Experience” tates that more than half of respondents say that digital technology is not only used to maintain communication but also helps them to go “offline”: »52% say good digital experience empowers people to use technology to not only connect to the world, but disconnect from it too.« This is done with the help of a kind of digital filter: »a kind of invisible digital filter that creates and protects a private offline space that only a select few can enter.« Strictly speaking, however, this also means that the user is not unwilling to leave the decision to the technology according to his “settings”.

An ever more complex world with ever more information also leads to the fact that humans would like to hide information, in order not to be paralysed by information and processes in its action and receptivity.

If one brings together the modules of technical possibilities and the mentality of producers and users, one can assume that an autopoietic system will develop which, in its operational closeness, ultimately generates “Things of Internet” (ToI). Even today, there are products that have never been touched by a human hand during their production. If, however, plan, purchase, execution, production and delivery of a product were created autonomously and without human intervention, one can speak of “things of the Internet”.

The question arises as to how networks – detached from human decisions (in the sense of approval) – control their production (machines, robotics), logistics and markets on the basis of algorithms and AI (Cloud Computing) and how they may become independent in the process. Artificial intelligence is increasingly finding its way into production. Automatic control of processes and their optimisation set the corresponding course.

Automation in production is nothing new: looms, steam engines, assembly lines, robotics, … Mass production has always been an expression of optimisation attempts. There were always dissenting voices, but developments could not be stopped. The path from the Internet of Things to the Things of Internet is therefore only a question of time, cultural conditions and market-based efforts. “Intelligent factories” will operate smartly and autonomously. They will produce tailored to suit a market need. They will probably be very good, probably even better than humans.

The automotive industry will, for example, dock its own “intelligent factories” as supplier or launch them itself. Material is purchased, processed, individualised and delivered on the world market as required. Big Data will help to optimise beyond company boundaries. Prices and logistics flows all over the world will be viewed in real time. Simulations play through political changes and the influence on the stock markets. Microevolutions (in the sense of trial & error) are implemented and, if successful, transformed into innovations. All this will happen more and more without human influence. “Intelligent factories” manage and optimize themselves.

A crucial question is: What role does the human being play?

USE UP — The #Manifesto to Consume | for all real fans of #FridaysForFuture thign.de/en/use-up-the-…

About a month ago from thign's Twitter via WordPress.com